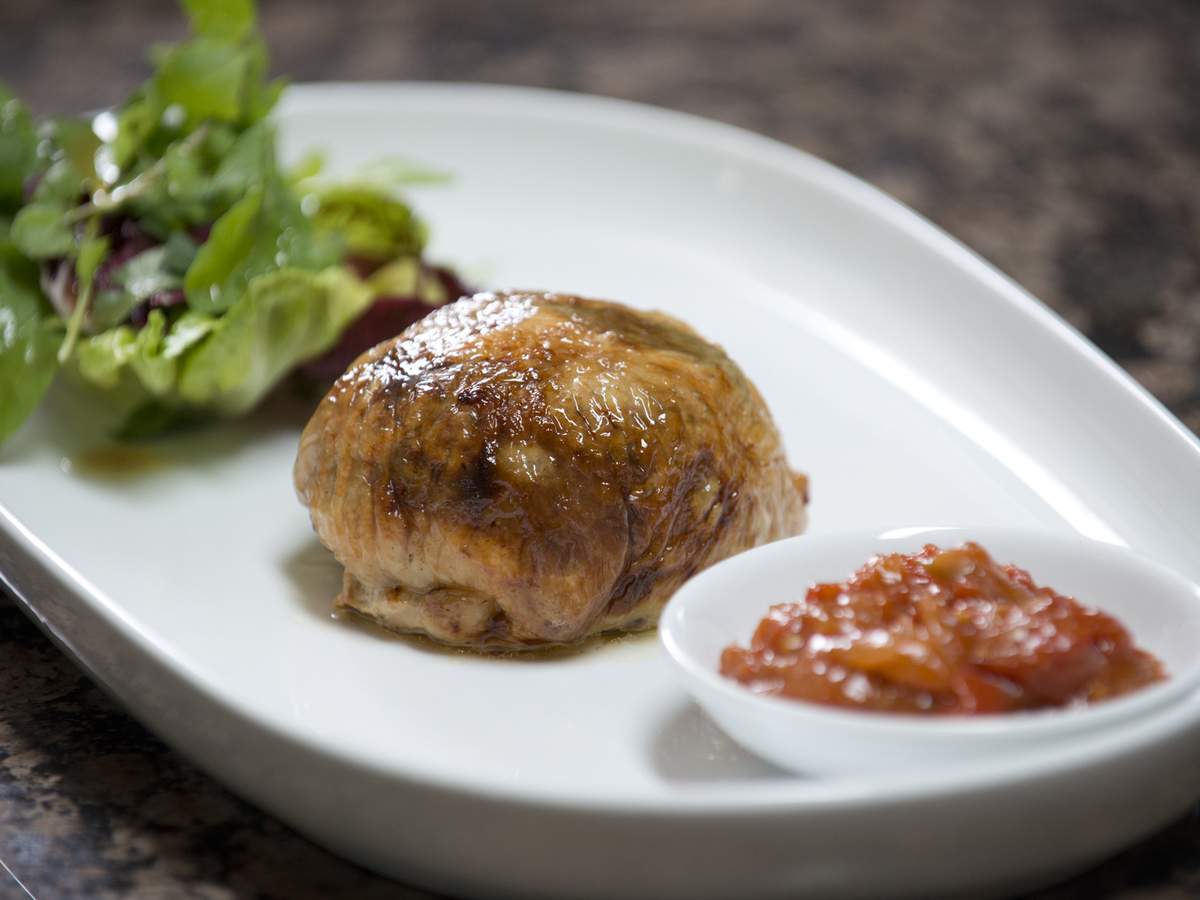 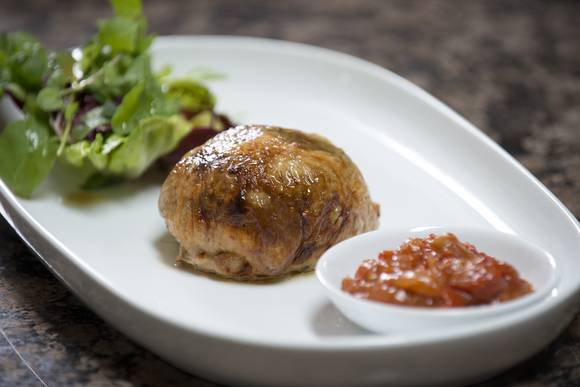 Step 2: Place a frying pan over medium-high heat, add butter and heat until it has turned nutty brown.

Step 4: Deglaze pan with one tablespoon of the Verjuice, and cook until it is sticky and reduced.

Step 5: Remove pan from heat and place mushroom mixture into a large bowl to cool.

Step 6: Skin chicken and place in a bowl.

Step 9: Finely chop mushroom mixture, then add bitter orange and preserved lemon rind, and tarragon to cooled mushroom mixture and mix until well combined. Add chicken leg mixture, diced chicken breast, sea salt flakes and egg to the bowl and slap the mixture against the side of the bowl until combined.

Step 10: Cut chicken skin into three even triangular shaped pieces, spread skin over ten centimetres tart tins and place a bay leaf in the centre of each piece, then add chicken mixture.

Step 11: Bring each end of the skin together to create a pouch, then place in the fridge for ten minutes to allow the skin to set.

Step 12: Invert tins onto a baking tray and carefully lift tins to remove. The skin should remain neatly tucked underneath, holding the parcel together as it cooks.

Step 13: Place baking tray into oven, and cook for 25-30 minutes or until the core internal temperature has reached 62C, using a meat probe thermometer.

Step 14: Remove from oven and drizzle one tablespoon of the Verjuice over each parcel. Allow to rest for fifteen minutes; the internal temperature should reach 65C.

This recipe will match beautifully with Maggie's Preserved Lemon and Currant Chutney, or see below for chutney recipe used on the show.

Step 15: For the chutney, heat Extra Virgin Olive Oil in a saucepan over medium heat. Add onion and cook for five minutes until softened and translucent. Add garlic and rosemary, and cook for two minutes.

Step 17: Bring to the boil, then reduce to a rapid simmer and cook until the mixture is reduced to about two cups and a chutney-like consistency. Remove from heat, and place into a bowl to cool. Season to taste with salt.

Step 18: For the dressing, whisk ingredients in a mixing bowl, and season to taste with sea salt and freshly ground black pepper. Set aside.

Step 19: For the salad, wash leaves and place in a large bowl. Lightly dress salad at the table.

Step 21: Note: There will be some mixture remaining, you can freeze this and cook at a later date.