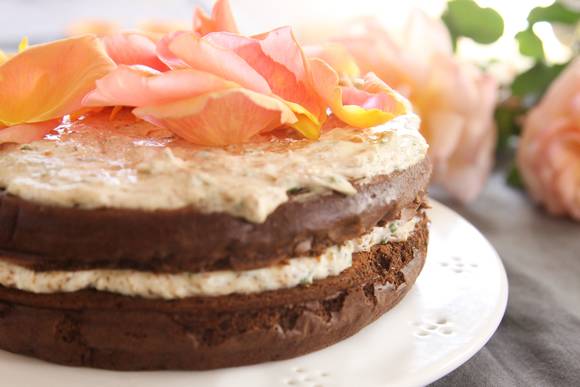 Step 2: Melt the chocolate and butter together in a heatproof bowl placed over a saucepan of just-simmering water (don’t let the bottom of the bowl touch the water). Remove from the heat, stir in the honey and set aside.

Step 3: In the bowl of an electric mixer, whisk the egg whites with a pinch of salt until stiff peaks form.

Step 4: In a separate bowl, whisk the egg yolks until thick and pale. Slowly whisk in the chocolate mixture until just combined. Fold in one third of the egg whites, then ever so lightly, fold in the remaining whisked whites. (It is important to work quickly and not let the chocolate butter mixture get cold or it will set.)

Step 5: Divide the batter between the prepared tins. Bake for 25 minutes or until a skewer withdraws clean. Remove from the oven and stand on a wire rack until completely cooled.

Step 6: To make the nut cream, beat the cream in a large bowl until stiff peaks form. In a separate bowl, combine the mint, nut butter and a small amount of the whipped cream. Gently fold in the remaining cream.

Step 7: To assemble, place one of the cakes on a serving plate and spread half the nut cream over the top, leaving a 2 cm border. Place the remaining cake on top and spread with the remaining cream. Scatter with rose petals, if using.